Thanks to Demetra, for giving us the opportunity to join the program Save The Rainforest by SIMBIO, a project aimed at preserving the biodiversity of the planet we call home.

“Biodiversity can be defined as the richness of life on earth: the millions of plants, animals and micro-organisms, the genes they contain, the complex ecosystems they constitute in the biosphere.” – ISPRA – Higher Institute for Environmental Protection and Research.

Amazon rainforest encompasses the single largest remaining tropical rainforest in the world, it also houses at least 10% of the world’s known biodiversity, including endemic and endangered flora and fauna. (source: WWF)

More than 10,000 species of plants and animals are at high risk of extinction due to the destruction of the Amazon rainforest – 35% of which has already been deforested or degraded, the rainforest is a vital bulwark against climate change both for the carbon it absorbs and what it stores.

The soil and vegetation of the Amazon hold about 200 billion tonnes of carbon, more than five times the whole world’s annual CO2 emissions. (source: reuters)

Today, Demetra gave us the opportunity to concur to protect the Amazon rainforest, in the concession managed by Justa Castro Quispe, within the region of Mother De Dios (Peru), an area of the surface of 1.000 m2 that allows to store 66,62 t/CO2 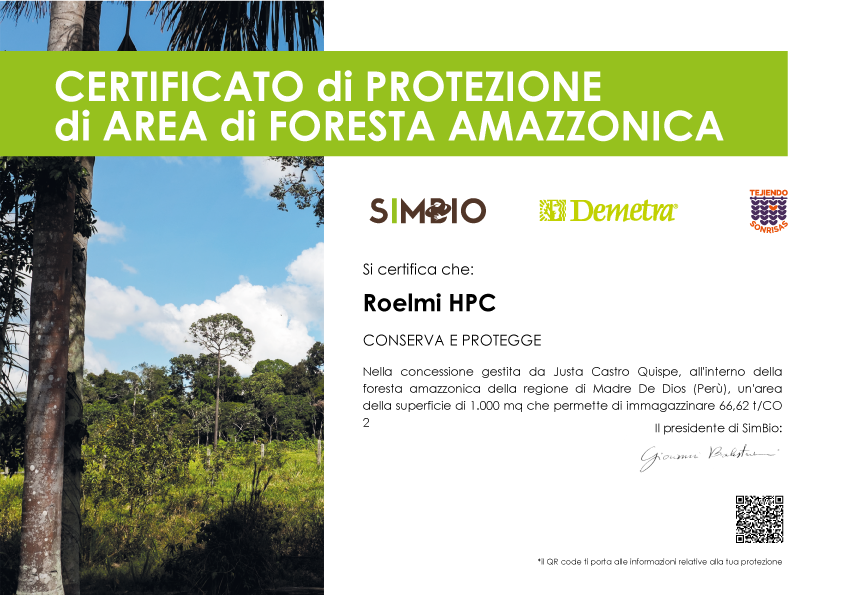